(Distance: 54 km, estimated driving time: 1 hr)
Arrive Paro. After immigration formalities you will be received by our representative who will be your tour guide throughout your tour.
Then travel to Thimphu which will take you through Chunzom (confluence of Pachu- the river flowing through Paro valley & Wangchu –the river flowing through Thimphu valley). On the way, enjoy walking over a suspension bridge to view 15th century iron chain bridge suspended over the Pa chu and also walk for about 10 minutes to visit Tachog Lhakhang (temple), this 15th century temple located on the base of a mountain across the Pa chu on the Paro-Thimphu highway.
After crossing Chunzom, the drive will take you along the Wangchu upto Thimphu city.
On arrival at Thimphu, Check into your hotel and relax for sometime after early morning flight.
After lunch visit the followings:
• The National Memorial Chorten (stupa) which was constructed in 1974 as a memorial for the third King of Bhutan, King Jigme Dorji Wangchuck, who is widely regarded as the father of modern Bhutan. The term ‘chorten’ literally means ‘ seat of faith’ and Buddhists often call such monuments the ‘Mind of Buddha’. Meet the elderly generation in circumambulation, especially in the evenings, at the National Memorial Chorten.
• Buddha Point /Kuenselphodrang: This massive Buddha statue is 51.5 meters in height and it is one of the largest statues of Buddha in the world. The statue is made of bronze and is gilded in gold. The throne that the Buddha Dordenma sits upon is a large meditation hall.
The Buddha Dordenma is located atop a hill in Kuenselphodrang Nature Park and overlooks the Southern entrance to Thimphu Valley. The statue fulfills an ancient prophecy dating back to the 8th century A.D that was discovered by Terton Pema Lingpa (Religious Treasure Discoverer) and is said to emanate an aura of peace and happiness to the entire world.
• Over night at hotel.

After breakfast Thimphu city tour and visit the followings;
• Visit 21 Tara, Dechencholing (Pangrizampa Monastery)
 Founded in the early 16th century, this complex is a college for traditional astrology. Zhabdrung Ngawang Namgyal lived here after he arrived in 1616 because this temple appeared in the vision that directed him from Tibet to Bhutan. It’s a photogenic stop even if none of the chapels are open. The two huge cypress trees in front of the complex are said to be the biggest in the country.
 The next-door Drolma Zhingkham Lhakhang was built by the Royal Grandmother and is dedicated to 21 images of Tara.
 Green Tara Buddha is almost certainly one of the most popular Yidams in Vajrayana Buddhism. In Tibetan Buddhism especially, Green Tara is accessible to all, Mother of all the Buddhas, and virtually a “universal” symbol of Active Compassionate Wisdom. Green Tara, who is also a Savior Goddess, is as accessible to the prisoner in jail as to the most benevolent of monks — she is Universal and opens to all. With her right leg outstretched, ready to leap to our aid, she is among the most approachable of Buddhist deities.
 But many people don’t realize she has a “Highest Yoga Tantra” aspect called Chittamani Tara (translates as “Mind Jewel Tara”) — a profound “two stages” practice.

Green Tara (left) is similar to Chittamani Tara (right). In fact they are the same being, but differ in visualization and practice (with Chittamani Tara being a Highest Yoga Tantra practice). Green Tara normally has one lotus (day lotus normally) in her left hand, blooming over her shoulder, while Chittamani Tara is distinguished by TWO uptala (blue night lotus) flowers, one over each shoulder. Often, online, the two are confused, and the two-flower Chittamani Tara is labeled as Green Tara.

• Tashichhodzong, “the fortress of the glorious religion”.
 This is the center of government and religion, site of the monarch’s throne room and seat of the Je Khenpo or Chief Abbot. Built in 1641 by the political and religious unifier of Bhutan, Shabdrung Ngawang Namgyal, it was reconstructed in the 1960s in traditional Bhutanese manner, without nails or architectural plans. Yet another place for photographer’s delight.
• Semtokha Dzong-
 Is the first of Shabdrung Nawang Namgyal’s Dzong or fortress built in 1629. It is much smaller compared to most other Dzongs in Bhutan. The dzong houses countless statues and paintings of various Buddhas, deities and religious figures including The Eight Manifestations of Guru Rimpoche, Jampelyang the Bodhisattava of Wisdom, Shakya Gyalpo the Buddha of Compassion and many more, all carved and painted in exquisite detail.
• In the evening explore Thimphu town on your own.
• Dinner at Babesa Village Restraunt and overnight stay at hotel in Thimphu.

After breakfast visit Tango and Cheri Monastery:
 The Tango-Cheri Monastery is a beautiful Buddhist monastery located 14 kilometres to the north of the capital city of Thimphu in Bhutan, near Cheri Mountain. It was founded by Lama Gyalwa Lhanampa in the 13th century and built in its present form by Tenzin Rabgye, the 4th Temporal Ruler of Bhutan, in 1688. The monastery itself is divided into 02 goembas (or monasteries) – Cheri Goemba, which houses the residential complex for the monks, and Tango Goemba, which houses the Tango University, considered to be the premier university for Buddhist learning.

 You must trek from a common entry point to the mountain. Along the trek, one may find thousands of small “tsa-tsa’s”, or miniature stupas, hidden among the cracks and crevices of the mountain, placed by pilgrims and families to ward off evil. The trek takes about an hour to either Goemba, but visitors are rewarded for their journey through picturesque views of the adjacent river and surrounding countryside.

• After lunch drive towards Paro and check into hotel.

After Breakfast hike to Chumphu Nye,(Vajrayogini)
 Chumphu is in Paro, the western District of Bhutan. It takes about 7 to 8 hours hike to reach and visit this site and be back. After leaving your vehicle at the end of the road, the walk is casual and not too tiring as the hike path goes through the forests so there is a lot of shade and cool breeze.

 The Floating Statue at Chumphu Nye in Paro is another wonder site in Bhutan.The main statue of the temple is Dorje Phagmo (Vajravarahi) which is mysteriously standing on air.This scared Dorje Phagmo statue was discovered from the lake above the monastery. History has it that the statue was found initially of smaller size than the present one.

 The statue is not resting; it is floating in the air. It is floating because the statue is Dorji Phamo who appeared in person and turned herself to a statue. It is not handmade. Dorje Phagmo, or the “Diamond Sow,” is an incarnation of Dolma (Tara), the divine consort of Shenrezig (Chenrezig).

 Once you are back, check into hotel and relax.
 In the evening, take a stroll into Paro town on your own and enjoy the Paro valley.
 Dinner and overnight stay in Paro.

• Drive to parking lot near Paro Dzong and walk over traditional Cantilever Rimpung bridge which is oldest bridge in Bhutan to visit Paro dzong Paro Rinpung Dzong (fortress), built in 1645 to defend the valley against Tibetan invaders. The Dzong is now being used as an administration center and school for monks. From the Dzong you will walk back down to Rimpung Bridge.

• Then visit National Museum, housed in the Ta Dzong (watchtower). Here is an intriguing collection of artefacts which provide you with a wonderful insight to the rich culture and heritage of the Kingdom of Bhutan.

• Next visit Kichu temple,one of the 108 temples built in the 7th century by the Tibetan King Songsten Gampo.

 After breakfast, drive for about 20 minutes to the base of Taktsang Monastery and then hike up to Taktsang Monastery, also known as ‘Tiger’s Nest’. The walk up to the viewpoint will take about 1 – 1 ½ hrs depending on your fitness and from View Point you will enjoy a spectacular view of the monastery clinging to the side of the cliff. Stop for refreshment at the View Point Cafeteria. Take photos with great view of Taktsang behind you.

 Souvenir shopping in the evening.

 After early breakfast your tour guide from The Overland Shangri-La Inc. will escort you to the Paro airport for your Drukair or Bhutan Airlines flight out of Paro. 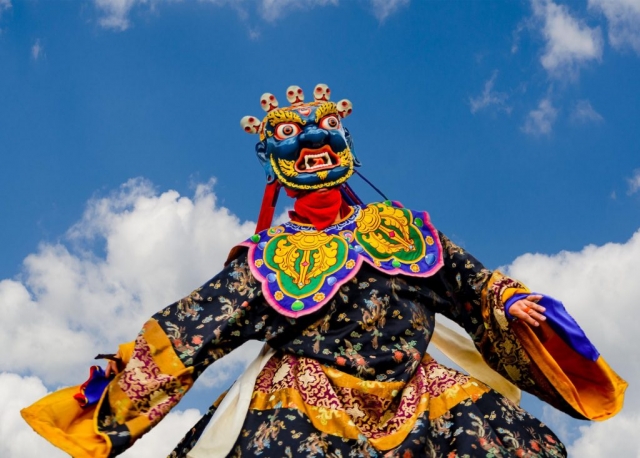 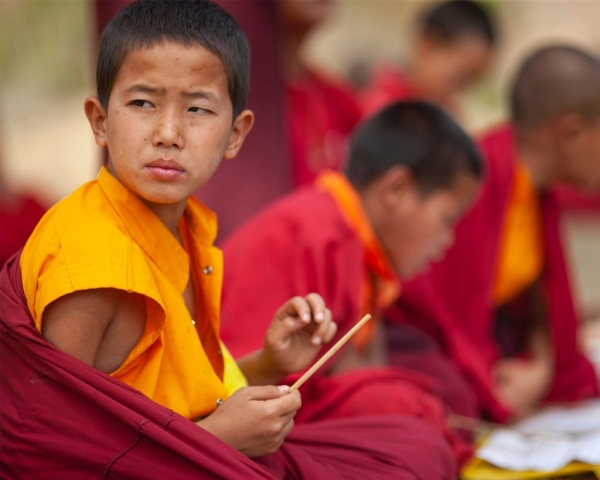 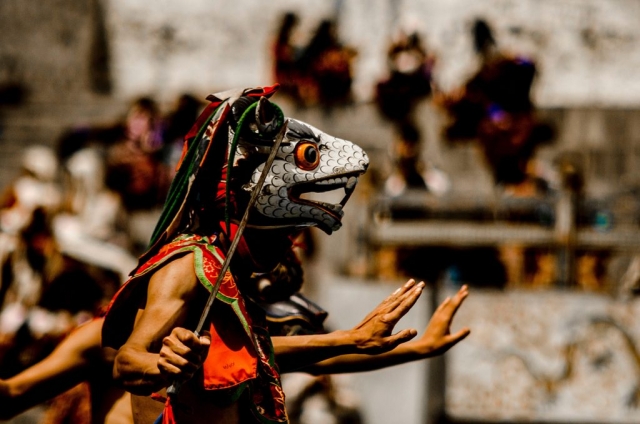